"When the Lights Go Out" due out on November 10 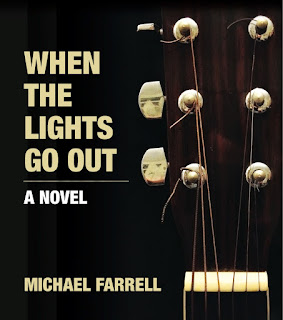 After six long years of writing, editing, re-writing, screaming, drinking, and thinking, I'm proud to say that my second novel, When the Lights Go Out, is finally ready for release by No Frills/Amelia on November 10. Here's the press release, distributed to the Buffalo media on October 30:

A barroom guitarist strumming between two lives. A faded bluesman drunk on his own legend. A rock pianist who responds to a higher calling. These compelling characters clash to drive the drama of author Michael Farrell’s second Buffalo-set novel, “When the Lights Go Out,” set for release by No Frills Buffalo on Nov. 10.

Farrell — whose debut novel “Running with Buffalo” was released in 2007 — returns to introduce readers to local musician Johnny “Nighthawk” Nolan, a downtown Buffalo favorite who spent his evenings exhaling covers and originals, all while basking in the adulation of devoted revelers. To Nolan, those nights under the lights meant everything — until he needed to walk away.

But what happens to a musician when his life strays from the stage? Does he settle into his marriage to a barroom waitress? Does he try to smooth past friction with the city’s most prominent bluesman? Or does he lean on the scene’s only garage band-leading Catholic priest to find his voice with or without the microphone? Throughout his journey from rock clubs to familial crisis and rediscovery of music’s revelatory meaning, Nolan will find out how life unfolds — when the lights go out.

Born in Buffalo and raised in Hamburg, Farrell is a graduate of St. Bonaventure University and earned an MFA in Creative Writing from Pine Manor College’s Solstice Program. His work has regularly appeared in numerous publications, including The Buffalo News, Buffalo Spree and The Boston Herald. More about Farrell and his writing can be found on his website at farrellstreet.com.

Books published by No Frills Buffalo can be purchased online at www.amazon.com, www.powells.com, www.barnesandnoble.com, www.ECKO.com and www.nofrillsbuffalo.com. No Frills Buffalo titles can also be found in Western New York bookstores, including Talking Leaves; Dog Ears Bookstore; The Second Reader; Monkey See, Monkey Do; Lift Bridge Books in Brockport; and Buffalo Street Books in Ithaca.
Posted by Michael Farrell at 10:26 AM No comments: