"When the Lights Go Out" - Chapter One 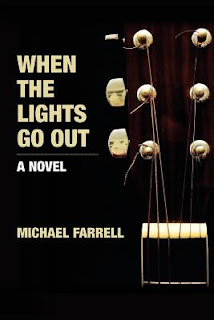 (Author's note: Last fall, I welcomed the release of my second novel, When the Lights Go Out. From its earliest stages, drafted throughout two years in grad school and edited after an unexpected return to Buffalo, it took six years to finish.

But as personally momentous of an occasion as this was, the novel was easily a distant second to another event that happened two days after its finalization: the birth of my son.

Yes, I was able to host some events at bars and bookstores and distribute some information over social media and through small publications. And yes, the work's found plenty of readers, ones that have been able to relate to the story's characters, its relationship between music and its meaning, and its elements of love, family and the ability to wade through tragedy in order to find some sort of purpose.

But overall, I wasn't able to promote the novel the way it should've been promoted. I thankfully had (and still have) more important things to worry about, and distributing the novel's contents to a larger audience fell by the wayside. I'd like to change that, starting today.

Below, you'll find the book's first chapter, and the next five will follow on the next five Fridays, ending December 9. If you like what you read, you can pick up the rest of it inside local Buffalo bookstores like Talking Leaves and Dog Ears; in paperback and Kindle form on Amazon; in under-scanned Internet areas like IndieBound; or with the publisher at No Frills/Amelia.

In the meantime, please enjoy the Buffalo-inspired content below, and keep checking back over the next weeks.)

1
Once upon a time
I had a life in mind
But then one day along the way
That dream was left behind
-“What I Lost” by J. Nolan

Posted by Michael Farrell at 7:59 AM